Lost your password? Please enter your email address. You will receive a link and will create a new password via email.

You must login to ask question.

Please briefly explain why you feel this question should be reported.

Please briefly explain why you feel this answer should be reported.

Please briefly explain why you feel this user should be reported.

Top African oil exporters Nigeria and Angola will struggle to boost output to their OPEC quota levels until at least next year as underinvestment and nagging maintenance problems continue to hobble output, sources at their respective oil firms warn.

Their battle mirrors that of several other members of the OPEC+ group who curbed production in the past year to support prices when COVID-19 hit demand, but are now failing to ramp up output to meet soaring global fuel needs as economies recover.

The Organization of the Petroleum Exporting Countries and its allies (OPEC+) agreed in July to add 400,000 barrels per day (bpd) to production from August until December 2021, slowly phasing out the unprecedented supply cuts.

However, Nigeria and Angola have under produced by an average of 276,000 bpd so far this year out of their combined average OPEC quota of 2.83 million bpd according to Definitive data. They are likely to remain below quota through the end of the year, according to industry sources and Reuters calculations.

The oil not pumped is worth hundreds of millions of dollars. 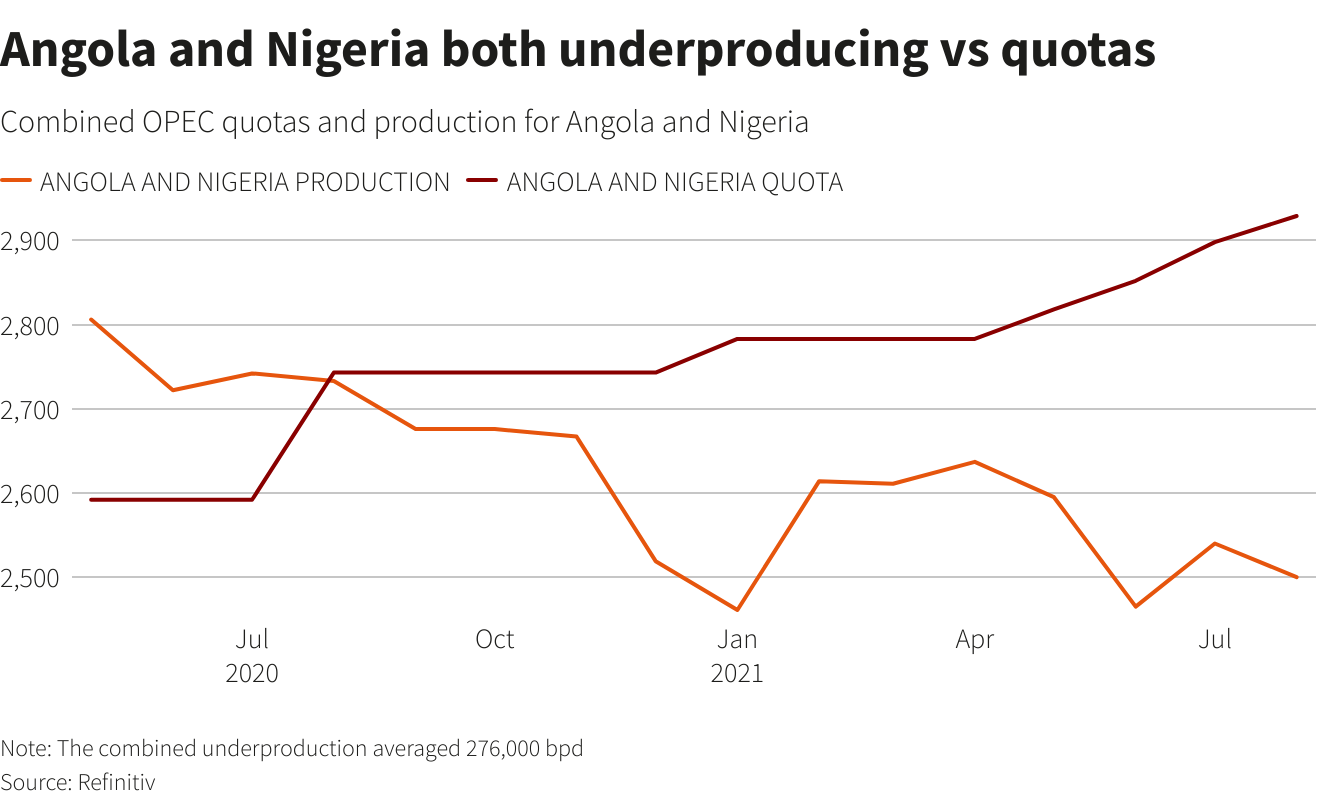 Kola Karim, chief executive of Nigerian producer Shoreline Natural Resources which has eight producing fields pumping around 50,000 bpd, said the backlog meant it would be one to two quarters before Nigeria could pump at its full capacity.

The maintenance backlog covers everything from servicing wells to replacing valves, pumps and pipeline sections. Companies are also behind on plans to do supplementary drilling to keep production stable. These issues impacted virtually all companies in Nigeria, Karim said.

“So now things are breaking…we’re now facing the music,” he told Reuters, though he added that the country would catch up on production by early 2022 as companies rush maintenance and repairs.

Spokesmen at NNPC and Nigeria’s oil and finance ministries did not reply to requests for comment.

Oil Minister Timipre Sylva told journalists last week that he expected Nigeria to meet its quota within a month or two, but did not specify how. The government has previously pointed to a recently signed oil overhaul law as key to boosting investment and production.

Angola’s finance ministry told Reuters that it could struggle to meet its target for years.

In June, Angola’s oil minister, Diamantino Azevedo, lowered its targeted oil output for 2021 by 27,000 bpd to 1.19 million bpd, citing in a statement production declines at mature fields, drilling delays due to COVID-19 and “technical and financial challenges” in deepwater oil exploration. That is below the current 1.33 million bpd quota.

It has embarked on a string of reforms to boost output.

“The reality is only five countries can actually hit these quotas in our view,” said Amrita Sen of Energy Aspects. “The rest are struggling with high decline rates and underinvestment.”

Those five are Saudi Arabia, the United Arab Emirates, Kuwait, Iraq and Azerbaijan. 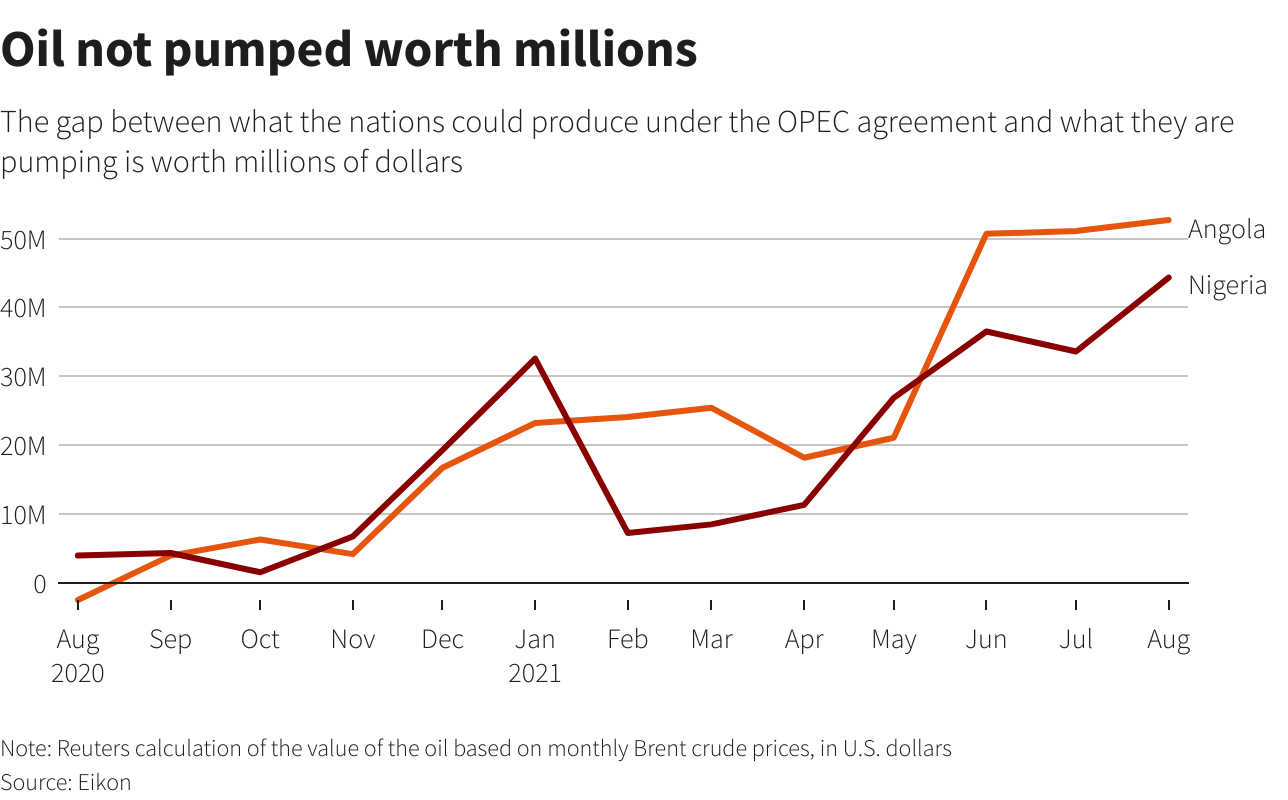 Bizil Graphics
In Nigeria, five onshore export terminals run by oil majors, which typically export around 900,000 bpd, handled 20% less oil in July than the same time last year, despite relaxed quotas, according to analysis shared only with Reuters from consultancy Hawilti Ltd. The decline indicates lower production from all the onshore fields that feed these terminals.

Only French oil major TotalEnergies’ (TTEF.PA) new deep offshore oilfield and export terminal Egina, had been able to quickly turn the taps back on, said Mickael Vogel, director at Hawilti, citing an analysis based on data from Nigeria’s Department of Petroleum Resources.

Onshore oilfield output has lagged as companies struggled with a lack of workers and cash.

“Putting those wells back onstream has been more challenging than they thought,” Vogel said.

Nigeria has not met its quota since July last year according to Refinitiv data. 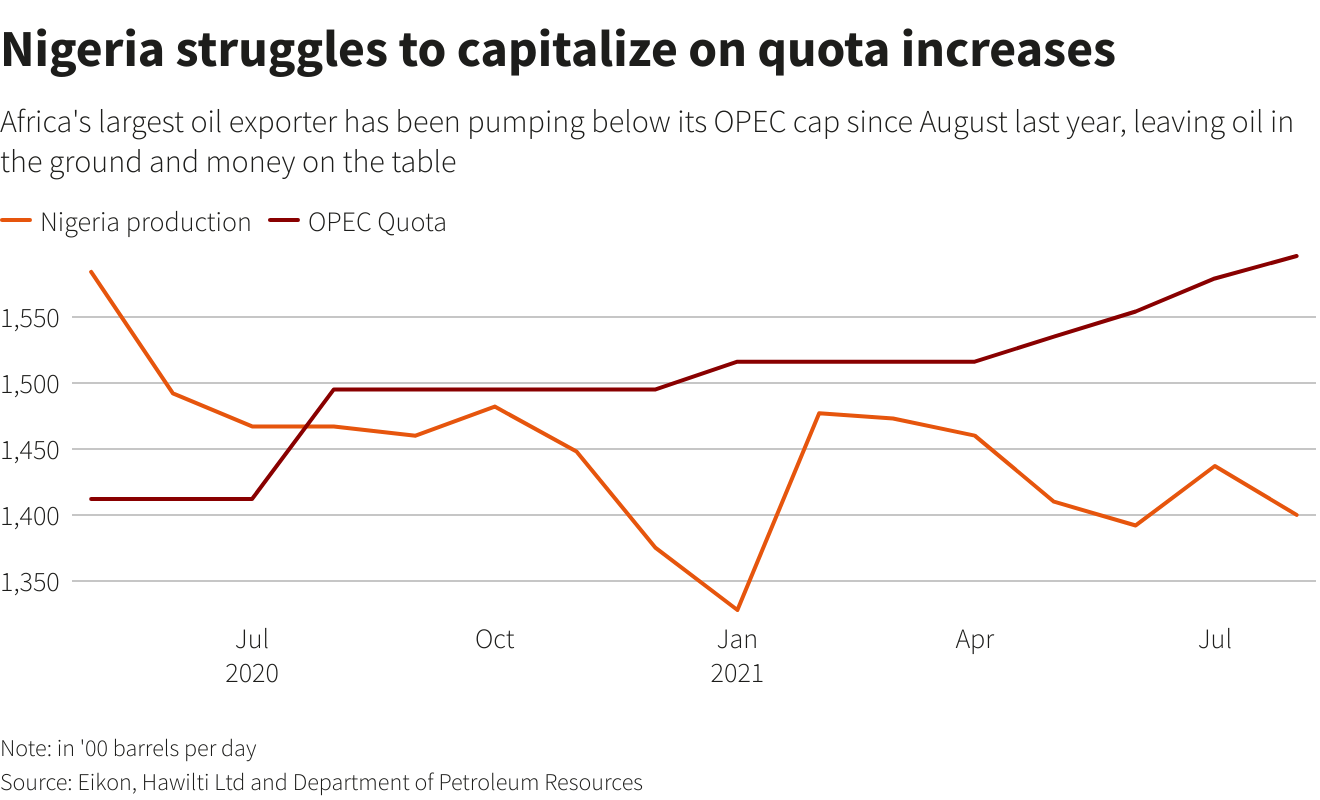 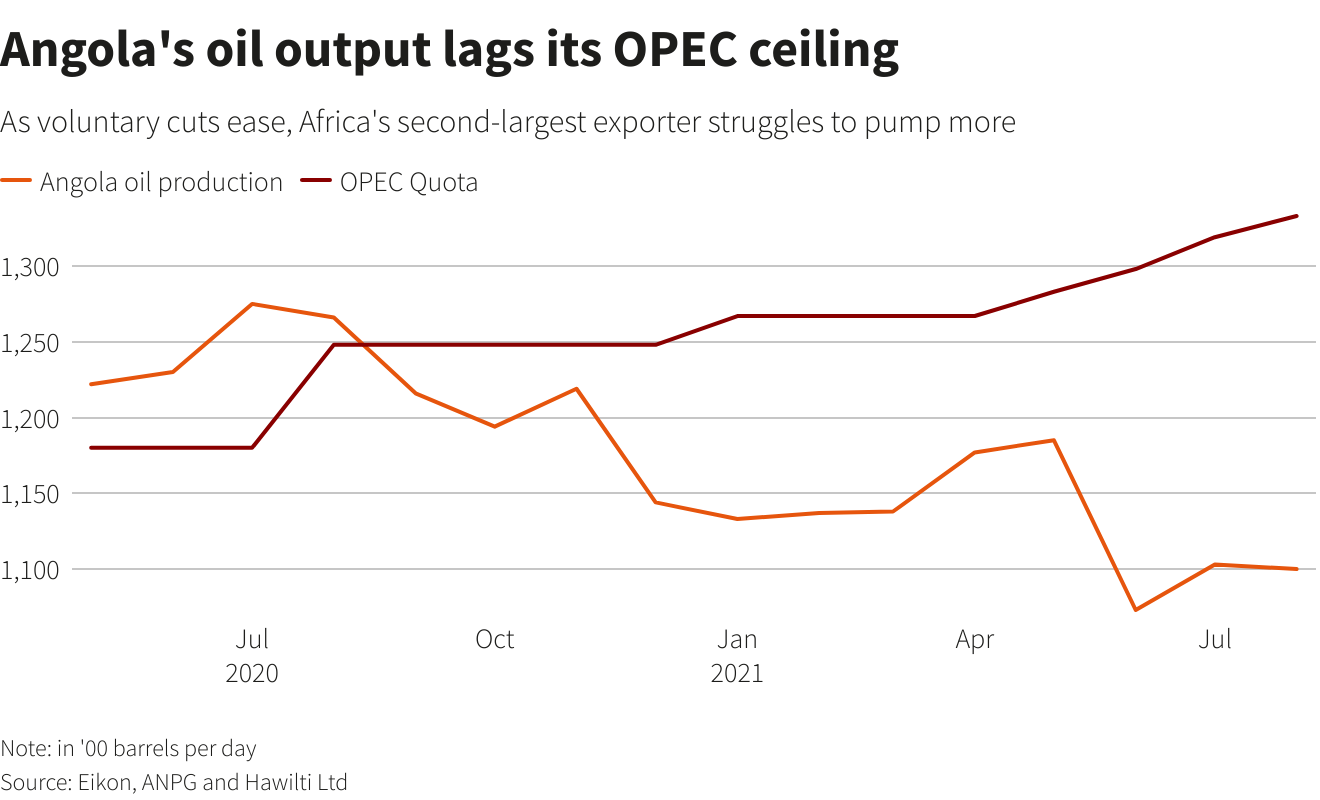 Bizil Graphics
It has struggled for years as its oilfields age and decline, and exploration has been insufficient to compensate, Justin Cochrane, director for African Regional Research for IHS, said.

Angola’s largest fields began production in the early 2000s and are past their plateau.

The country made a string of reforms in 2019 aimed at boosting exploration, including allowing companies to produce from marginal fields adjacent to those they already operate. The pandemic stunted the impact of those reforms. By May, not a single rig was drilling in Angola for the first time in nearly 40 years.

Since then, only three offshore rigs have resumed work.

Afghan army collapse 'took us all by surprise,' U.S. defense ...

Turkey to press Russia to restore calm in Syria's Idlib