Lost your password? Please enter your email address. You will receive a link and will create a new password via email.

You must login to ask question.

Please briefly explain why you feel this question should be reported.

Please briefly explain why you feel this answer should be reported.

Please briefly explain why you feel this user should be reported.

The celebrations started in the 95th minute and continued for almost an hour after the full-time whistle.

Manchester United needed some cheer, and they got it as Wednesday’s Champions League match against Villarreal was won five minutes into stoppage time. “Viva Ronaldo” filled the air on a night reminiscent of the glory days – for both United and their match-winner.

Cristiano Ronaldo enjoys playing in the Champions League. He provided further proof by delivering another unforgettable moment in the competition.

The Portuguese superstar has scored many great and important goals in European competition. Here was one that brought United’s delighted supporters to their feet. Those present for the first Champions League match in front of a crowd at Old Trafford for two and a half years had been treated to a storming finish.

United were disappointing overall against Villarreal and were heading for a third straight game without victory until Ronaldo stroked in from Jesse Lingard’s lay-off.

Despair turned to joy in a flash as Ronaldo rippled the net before running off to the corner, ripping off his shirt and throwing it into the air in celebration.

“That is what happens at Old Trafford,” manager Ole Gunnar Solskjaer told BT Sport. “It has happened so many times before. We had to throw caution to the wind and we got lucky in the end.

“Sometimes it is not about ‘pass there, pass there’, it is the crowd – and they have sucked it in before – and when you have Cristiano on the pitch, you always have a chance. He is so good in front of goal and he has an impact on everyone.”

‘That is what world-class players do’ 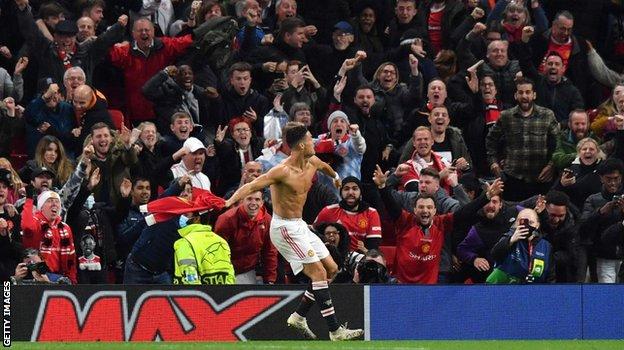 Ronaldo was booked for ripping off his shirt in celebration
Ronaldo returned to United in August after 12 years away, having at one stage looked close to joining rivals Manchester City. It is believed that he spoke to Sir Alex Ferguson, his former United manager, before deciding to come back to Old Trafford.

The 36-year-old has a rich history in the Champions League, having lifted the trophy five times. Against Villarreal, he made a record 178th appearance in the competition. United needed his inspiration on Wednesday.

Solskjaer was under pressure after a humiliating loss in the opening group game against Young Boys. His side came into the contest following back-to-back home defeats in limp displays against West Ham and Aston Villa.

But match-winner Ronaldo stood up with his fifth goal of the campaign in the renowned ‘Fergie Time’, bringing a beaming smile to the face of his old boss Ferguson, who enthusiastically applauded the winner.

It also brought much relief to Solskjaer and supporters in the stands, who stayed inside the stadium long after full-time with that continuous rendition of “Viva Ronaldo”.

“When your team needs you, Cristiano Ronaldo produces. Credit to Manchester United – they didn’t play that well, but well done to Ronaldo.

“He can have a quiet night, but that’s what world-class players do – they finish like that.”

Solskjaer added: “He has done that so many times. That is what he has done throughout his career.

“He is so strong mentally, he stays in the game and I have seen him all day today, how focused he has been.

“When he gets that one chance, it is a goal. A true mark of a very good finisher is keeping calm when the chance arrives.”

United should have lost the game.

It was only scoreless at the break because of Villarreal’s poor finishing and the brilliance of David de Gea in the home goal. But the visitors did take the lead in the second half when Paco Alcacer slid in to score from close range.

Solskjaer had the talent to cause Villarreal problems – Ronaldo, Bruno Fernandes, Mason Greenwood, Jadon Sancho and Paul Pogba all started – but the manager needs to figure out how best to make them effective together.

He did see a moment of genius from Alex Telles, whose fabulous volley was a reminder of a much-repeated goal Paul Scholes scored in a Premier League game at Bradford 21 years ago. But the match looked to be heading for a draw until Ronaldo struck in the 95th minute.

Ronaldo’s 2008 Champions League winning team-mate Owen Hargreaves said on BT Sport: “For Solskjaer, you can see the emotion on his face. This stadium went nuts and that’s what Ronaldo gives you.

“He gives you hope because he can score these big goals. You don’t take Ronaldo off because that’s what he can do. The stadium got up for them and their big players got them over the line.”

‘When Ronaldo gets that one chance, it’s a goal’ – Solskjaer
Ex-striker Michael Owen added: “I think United rely a bit too much on individual brilliance and moments, like the goal from Alex Telles, one of the great goals Old Trafford has seen in the last few years

“But, in the last 10 minutes, it felt more like a team, they were much better. And when you’ve got Ronaldo, you’re always in with a chance of something happening.”

United have a testing schedule coming up – before the end of November, they face Liverpool, Tottenham, Manchester City, Chelsea and Arsenal in the Premier League, as well as two Champions League meetings with Atalanta and the return match against Villarreal.

It will be no easy spell for the manager. Solskjaer’s reign seems to teeter between delight and despair. Should his side continue to struggle as a unit, the Norwegian will need further moments of individual brilliance from his star players.

Pitch invasions: Football 'cannot gamble' with such situations, according to ...

Diego Carlos has agreed to join Aston Villa for £26 ...

Teammates in Golf Foursome Score 2 Holes-in-one Back to Back: ...

Arsenal sign Martin Odegaard from Real Madrid for about £30m ...

Sports Belarusian sprinter who defected plans to run for Poland

Osaka felt 'ungrateful' for her attitude to tennis

Jorginho: Chelsea and Italy star's rise from Brazil's beaches to ...